A hydrocele is a build-up of fluid in the membrane that surrounds the testicle.

Types of hydrocele include: 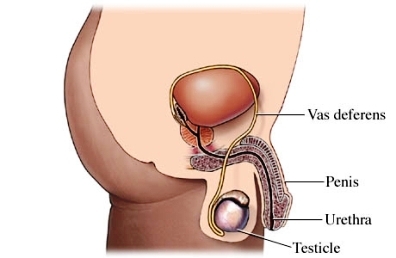 A communicating hydrocele is more common in infants and children. It occurs during fetal development. Testicles develop in the abdomen. They eventually move into the scrotum through a small channel. This channel should close after the testicles pass through it. When the channel does not close, fluid can pass from the abdomen into the membrane covering the testicle.

A noncommunicating hydrocele is more common in adults. It may be caused by an injury or infection that causes fluid build-up. It can also be a complication of surgery. In some cases, the cause is unknown.

Factors that may increase the chances of a hydrocele:

You will be asked about your symptoms and medical history. A physical exam will be done. A hydrocele is usually diagnosed by physical exam. The doctor may want to do tests to confirm a cause or rule out other conditions.

Fluid may be removed with a needle. It may be done for a large hydrocele that causes discomfort or obstruction. Aspiration may need to be done more than one time because fluids can return.

For adults with a hydrocele, fluid aspiration may be followed by sclerotherapy. A needle is inserted into the same area with a sclerosing agent. The sclerosing agent causes scar tissue in the channel which blocks the flow of fluid.

A hydrocelectomy may be advised if the hydrocele:

Some hydroceles cannot be prevented. However avoiding testicular trauma, such as by wearing protective gear during contact sports, may reduce the chances of developing some types of hydroceles.