True or False: Being Exposed to Wet, Cold Weather Increases the Risk of Infection 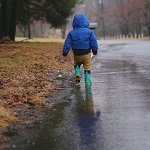 “Don’t go out with that wet hair!” Most of us heard this advice growing up, from a parent or someone who insisted that exposure to cold weather or a sudden chill could cause us to catch a cold, or worse!

In truth, it is bacteria and viruses, not the weather, that cause infections such as the common cold, influenza (the flu), or pneumonia. Why then, do so many people seem to get sick in the cold, wet months of fall and winter? While it may not be the weather itself, the cold seasons that keep many of us inside are associated with an increased risk of developing an infection.

Evidence for the Health Claim

There is no doubt that respiratory infections such as colds and the flu occur more often during the fall and winter months. The US government’s National Institute of Allergy and Infectious Diseases proposes that the reason for this may have to do with the opening of schools and the tendency for people to stay inside around others during colder seasons. Both of these factors increase the opportunity for viruses and, less often, bacteria to spread among people.

Additionally, some studies have shown that stressful conditions, including exposure to cold weather, make animals more susceptible to being infected with a variety of bacteria and viruses. These studies, which have so far been conducted primarily on mice, suggest that exposure to severe chilling may suppress the immune response, making it harder for the animals to fight infections.

Finally, the relatively low humidity in colder months may increase the risk of getting certain infections. For instance, the most common cold-causing viruses survive better in low-humidity environments, as is the case in the fall and winter. It has also been proposed that cold weather may dry out the inside lining of your nose, making it more susceptible to penetration by a virus.

Evidence Against the Health Claim

It is clear that viruses and bacteria, not cold or wet weather, cause infections. Viruses and bacteria are often transmitted from person-to-person by inhaling them in the form of air droplets (from a sneeze or cough) or touching contaminated skin or surfaces and then touching the eyes or nose.

There is no evidence that humans can get a cold or other infection from exposure to cold weather, or from getting chilled or overheated. When scientists placed cold viruses directly into the noses of study participants before either exposing them to cold temperatures or not, they failed to find any connection between cold exposure and susceptibility to infection with common cold viruses. And a review in Medicine and Science in Sports and Exercise concluded that there is no scientific support for the concept that exposure to moderately cold temperatures depresses immune function in humans. (Of course, prolong exposure to extremely cold temperature can lead to a condition called hypothermia, which may result in numerous health effects.)

Being exposed to cold, wet weather, in and of itself, will not cause you to contract infections. But your chance of developing a cold or the flu does increase in the winter months (beginning in September and lasting until March or April in the US). So, that fashionable wool scarf your mom made you wear to school? No reason for it (except perhaps to annoy you).

The best way to avoid an infection is to limit your exposure to the viruses and bacteria that cause them, irrespective of the weather. This means staying away from infected people, keeping your hands away from your eyes and nose, washing your hands often (especially during the cold season), and cleaning surfaces that may be infected with bacteria or viruses with a disinfectant.

Common Colds: Protect Yourself and Others. Center for Disease Control (CDC) website. Available at: https://www.cdc.gov/features/rhinoviruses/. Updated February 11, 2019. Accessed May 21, 2020.