Smallpox is a viral infection. It is highly contagious and can be deadly. The disease was eliminated worldwide. This was done through global immunization programs. The last known natural occurring human case was in 1977. Governments have studied its use as a germ-warfare weapon. As a weapon, it would be released in the air. Those exposed could develop the disease. They would then pass it to other people. 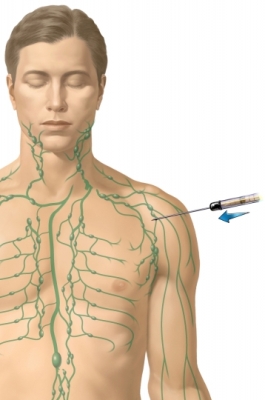 Smallpox is caused by a virus called Variola major. It is spread:

The main risk factor for contracting smallpox is exposure to the virus in a laboratory or after its release during a biological terrorism attack.

You will be asked about your symptoms and medical history. A possible source of exposure will be looked for. A physical exam will be done.

No effective treatment for smallpox currently exists. Doctors can offer supportive care. Steps will be taken to prevent the spread to others.

Fluids are given. The skin is kept clean. Medications can help control fever and pain. Antibiotics do not work against viruses. They may be given if other infections develop.

Cases are reported to public health officials. A person infected with smallpox should be kept isolated. This will help prevent the spread of infection.

In most cases, family members would provide care at home. Caregivers should:

People in the hospital will be placed in a special room. In some cases, forced quarantine may be necessary.

Many people were immunized prior to 1972. That protection has likely worn off or decreased. Routine vaccination is not recommended in the US.

An emergency supply of the vaccine is kept. A vaccination within 4 days of exposure may prevent the disease. It can also make symptoms less severe. Anyone in close contact with someone who is infected after the fever has started should receive the vaccine. Medical and emergency personnel also should be given the vaccine.

Two weeks or more could elapse before the first symptoms occur. The success of an attack would depend on the dose that was inhaled. Experts predict most of the released viruses could live in dry, cool air, without sunlight, for up to a day. Each person infected would likely pass the disease to 10 to 20 other people. Those people, in turn, could spread it to others. The fatality rate in naturally occurring smallpox is 30% or higher.