Removal of the cancer is the most common treatment if it has not spread far. The goal is to remove as much of the cancer as possible while keeping as much colon and/or rectum as is safe. It is common to combine surgery with radiation therapy and/or chemotherapy. It will increase the chance that all the cancer is removed.

Surgery may need to be done on the colon, rectum, or both.

An area of the colon is removed during a partial colectomy. It may be done to remove cancer that is deep in colon wall. The tumor, health colon around it, and nearby lymph node may all be removed. The healthy parts of the colon (and rectum) can often be reconnected. That means the colon and anus can continue to work.

A laparoscopic surgery uses small incisions to access the area. This can lead to faster recovery than open surgery. This surgery will also remove the tumor, healthy tissue around it, and nearby lymph nodes. All tools will be passed through small incisions in the belly. 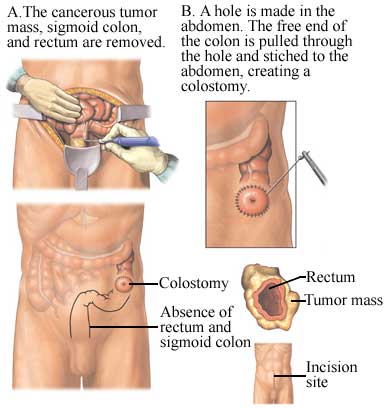 Rectal surgery is more complex. This surgery involves other nearby tissue, such as urinary system tissue.

A scope is passed into the anus and rectum. The scope allows the doctor to see inside the rectum. Tools are sent through the scope to remove polyps and/or early stage cancer. It is only helpful for cancer that has not invaded into the deeper layers of the rectum. Tissue samples of the rectum can also be taken for biopsy.

This procedure is also called a full-thickness resection. A scope is passed into the anus, and into the rectum. The surgeon removes both the cancer and some surrounding healthy tissue. Local transanal resection is used for early stage cancers that are small and closer to the anus.

TEM is a highly specialized procedure. It can be used for early stage cancers that are farther away from the anus. A magnifying scope and tools are placed through the anus, and up to the rectum. The cancer and some surrounding healthy tissue will be removed. The hole in the wall of the rectum will then be closed.

Low anterior resection is used to remove cancers that are high in the rectum, closer to the colon. Incisions are made in the belly. Part of the rectum where the cancer is will be removed. Nearby lymph may also be removed. The colon is then reattached to the remaining part of the rectum.

Chemotherapy or radiation therapy may be used before this procedure. In this case, a temporary ileostomy may be needed. An ileostomy brings the last portion of the small intestine out through a hole in the belly wall. This will allow waste to pass out of the body into a pouch and let the rectum rest. The procedure may then be reversed.

A temporary ileostomy may be necessary. Stool will pass from the small intestine through the stomach wall to a bag outside of the body. This allow the bowel time to heal. The bowel may then be attached to the anus at a later date.

Local organs may need to be removed if the cancer has spread beyond the rectum. The rectum, along with the bladder, prostate, or uterus may all be removed. After this procedure, a permanent colostomy will be necessary. If the bladder is removed, a urostomy will also be done. A urostomy is an opening in the belly wall that lets urine pass out of the body.

Metastatic colorectal cancer cannot be cured with surgery. Surgery may help to prolong life by treating tumors in other parts of the body. It is most often used for cancer that has spread to the liver, but it can also be used on other tumor sites. Options include:

Ablation is the destruction of cancer cells without removing the tumor from the body.

Tumors grow and spread using the body's blood supply. During embolization, substances are injected to slow or stop blood flow to the tumor. It can slow or stop growth of tumor.

Depression is a common symptom of colorectal cancer. During a hospital stay, psychotherapy may be part of the treatment plan.