Biliary atresia is a blockage of bile ducts in infants. Bile ducts are tubes that pass a fluid called bile from the liver to the gallbladder.

Bile helps with digestion. It also carries waste and toxins out of the body. When bile cannot pass out of the liver, it builds up and damages the liver.

The cause of biliary atresia is not clear. For some, the ducts do not form properly and are closed off. A blockage may also develop from swelling of the ducts. This may happen before or after birth. The swelling may be due to:

Biliary atresia is more common in female infants, but it also occurs in males. It is also more common in premature infants and children from Asian and Pacific regions.

Changes in certain genes may play a role in this condition.

Most symptoms of biliary atresia appear in the first 2 to 4 weeks of life. A few symptoms may not occur for 3 months or longer. Symptoms may be: 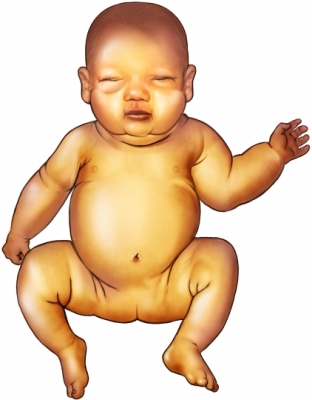 The doctor will ask about the infant’s symptoms and health history. A physical exam will be done. The infant may be sent to a specialist.

The diagnosis is based on tests, such as:

Other tests may be:

The goal of treatment is to restore bile flow and manage symptoms. Options are:

If the Kasai procedure is not successful, a liver transplant will be needed in the first few years of life.

Even if the Kasai procedure is successful, sometimes the liver gets badly damaged. This is called cirrhosis. In this case, a liver transplant may be needed later in life.

There are no known guidelines to prevent biliary atresia.