Birthmarks are colored spots on the skin. They may develop before or shortly after birth. These marks can be bright red, pink, brown, tan, or bluish. Birthmarks can be flat on the surface of the skin or raised. 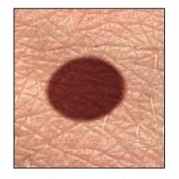 The exact cause is not known. Some birthmarks can be genetic or part of a disease.

Birthmarks may be more common in certain people. For example:

Symptoms differ depending on the type of birthmark. For example:

Moles are birthmarks people are born with. Rarely, moles can become cancerous.

The doctor will ask about your symptoms and health history. A physical exam may be done. Birthmarks are usually diagnosed based on how they look. If the doctor has any concerns a biopsy may be taken. You may also need to see a doctor who treats skin problems.

Most birthmarks can and should be left alone. They may only need to be monitored. Treatment may be needed if:

Treatment depends on the type of birthmark. Options are: