Gastrointestinal (GI) bleeding is bleeding in the digestive tract. It can be deadly. 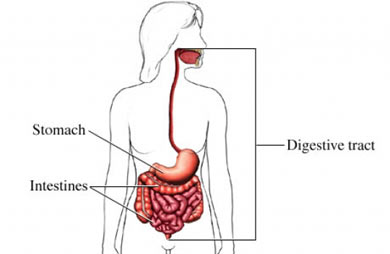 The upper digestive tract is the:

The lower digestive tract is the:

GI bleeding has many causes.

Causes in the upper digestive tract:

Causes in the lower digestive tract:

Upper and lower digestive tract bleeding may cause:

Sometimes, bleeding can happen quickly and be severe. This may cause:

Bleeding may be light and happen for a long time. This may cause a person to be tired and have problems breathing.

The doctor will ask about your symptoms and health history.

Tests that may be done are:

Treatment depends on what is causing the bleeding. Some choices are:

Medicines may need to be stopped or changed. Depending on the cause, one or more other medicines may be used to:

Endoscopy can also be used to stop bleeding by:

Angiography can also be used to control bleeding. Other tools are used to find the bleeding. Medicines or other materials are injected into the blood vessels to control it.

Surgery may be used when other methods fail. It may be needed to treat problems, such as uncontrolled bleeding.

To lower the risk of GI bleeding: