(Peptic Ulcer of the Duodenum)

A duodenal ulcer is a sore in the lining of the intestine. The first part of the small intestine, just past the stomach, is called the duodenum. 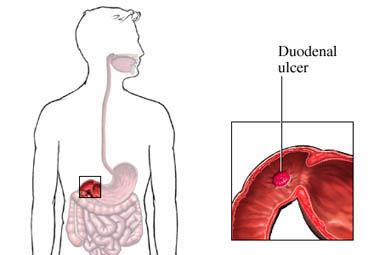 Upsets in the balance of stomach acid and digestive juices can lead to an ulcer. This can be caused by:

Some people may not have symptoms. Others may have problems that come and go. Food or fluids sometimes make symptoms better. Having an empty stomach may make symptoms worse.

Ulcers can cause serious problems and severe belly pain. One problem is bleeding. This may result in:

A perforated ulcer is a break through the wall of the duodenum. It causes sudden and severe pain.

Treatment depends on what is causing the ulcer. Options are:

NSAIDs causing this problem may need to be stopped or changed. Medicine may also be given to protect the stomach against NSAID damage.

Other medicines may be:

Changes may need to be made, such as:

People who are not helped by other methods may need surgery to:

Use NSAIDs as advised to lower the risk of this health problem.