Stroke is an injury to the brain. It happens when the brain's blood source is stopped. Blood carries oxygen that all cells in the body need to live. The brain has one of the highest demands for oxygen. Cells in the brain die if they are without oxygen for more than a few minutes. This can cause lasting harm to the brain.

Other terms for stroke are cerebrovascular accident (CVA) or brain attack. 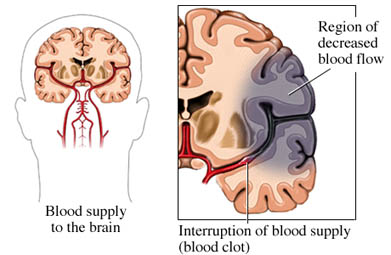 Blood vessels that carry blood from the heart to the body are called arteries. Oxygen-rich blood is brought to the brain through the carotid and vertebral arteries along both sides of the neck. These arteries split into smaller vessels that reach throughout the brain and skull. If they are harmed or blocked, it can slow or stop blood flow to the brain. The amount of harm depends on how much tissue was affected, how long blood flow was slowed or stopped, and the part of the brain it was in.

Blood Supply to the Brain 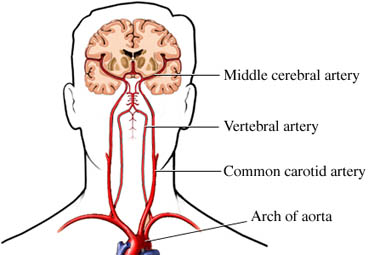 Types and Causes of Stroke

An ischemic stroke is when a blood vessel of the brain is blocked. Most strokes are ischemic. It may be blocked by:

A stroke may also happen if a blood vessel breaks and bleeds into or around the brain. Hemorrhagic stroke is the most common type of stroke in young people. The main causes are:

A silent stroke happens without any of the usual signs or symptoms. They cause harm to brain tissue and raise the risk of a major stroke in the future. They tend to happen in silent parts of the brain that aren't clearly active for thinking or moving. Brain tissue harm is often found during imaging tests.

Strokes can be grouped by their course in time:

Many small strokes may happen over time, from days to years. They can cause as much harm as one big stroke.