A deviated nasal septum is a problem with the alignment of the wall that separates the left and right nostrils. This may make it hard for air to flow equally through each nostril. 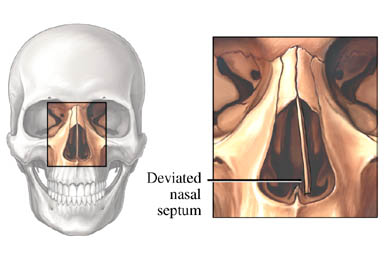 A deviated septum may be present at birth. It may also be caused by an injury.

Playing contact sports raises the risk of this problem. Examples are karate or football.

You will be asked about your symptoms and health history. A physical exam will be done. It will focus on the nose. This is enough to make the diagnosis.

People who do not have symptoms may not need to be treated. Others may need surgery. This is called a septoplasty. The goal of surgery is to ease breathing by centering the septum between the two nostrils.

Rhinoplasty may also be done to reshape the nose at the same time. Together the two surgeries are called septorhinoplasty.

Wearing protective headgear when playing contact sports may lower the risk of trauma.