Ovarian cysts are fluid-filled sacs in or on the ovary. They are common. There are different types of cysts based on where they develop or what material is in the cyst.

Close Up of Ovary and Fallopian Tube 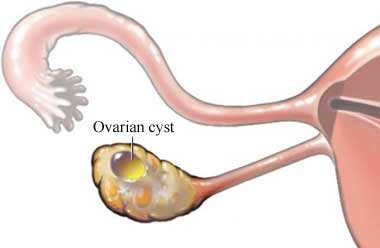 The cause of ovarian cysts depend on the type of cyst. The type of cyst a person has depends on where it forms or what material is in it.

Functional cysts are the most common type. It is normal for cysts to develop as part of the ovulation cycle. However, functional cysts stay or grow. The two types are:

Some cysts can also be caused by pelvic infections that have spread to the ovaries.

Cysts are more common in people with regular, monthly menstrual cycles. Other things that may raise the risk are:

Most people do not have symptoms. Others may have:

The doctor will ask about symptoms and past health. A pelvic exam will be done. Cysts are often found during routine pelvic exams.

Other tests may be done to find out what type of cyst you have and whether treatment is needed.

Some cysts will go away in time without treatment. A person may be watched for any changes.

Cysts that are causing problems will need to be treated. Surgery will be done to remove them. Sometimes the ovary will need to be removed as well. If both ovaries are removed, menopause will begin right away.