Pyloric stenosis is narrowing of the opening from the stomach to the duodenum, the first part of the small intestine. Narrowing prevents food from passing freely between the 2 structures. Pyloric stenosis affects your baby's ability to get adequate nutrition and hydration. The sooner your baby is treated, the better the outcomes. 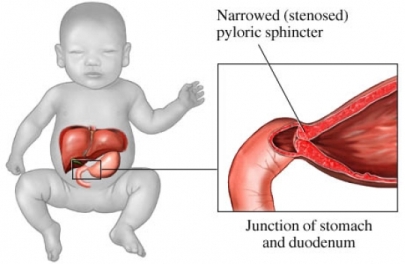 The narrowing is caused by an enlarged muscle surrounding the pylorus. The exact cause of the enlarged muscle is unknown. It is believed to be the result of several factors, which may include:

Pyloric stenosis is rarely present at birth. Symptoms generally appear when babies are 3-12 weeks old. The most common symptom is forceful, projectile vomiting. This is because of the build-up of formula or milk in the stomach that cannot pass into the small intestine.

Pyloric stenosis may also cause:

The doctor will ask about your baby's symptoms and medical history. A physical exam will be done. In many babies, an olive-shaped knot caused by the presence of pyloric stenosis can be felt.

Imaging tests assess the stomach, small intestine, and other structures. These may include:

If your baby is diagnosed with pyloric stenosis, they will be referred to a pediatric surgeon for treatment. Pyloric stenosis is treated with pyloroplasty (also called a pyloromyotomy), a procedure to relieve blockage.

Prior to surgery, fluids and electrolytes will be given by IV to correct any dehydration or electrolyte imbalances that are common in babies with pyloric stenosis. After the procedure, IV fluids are given until your baby can take all of their normal feedings by mouth.

There are no current guidelines to prevent pyloric stenosis because the cause is unknown. Talk to your doctor about proper prenatal care before or during pregnancy.