Tissue that forms outside of the womb will also thicken due to estrogen changes. However, it cannot pass out of the body during menstruation. This causes swelling and scarring in the belly and pelvis. 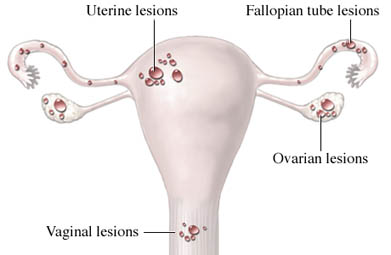 The cause of endometriosis is not known. It may be due to:

Endometriosis is more common in women of reproductive age. Other things that may raise the risk are:

Some people do not have problems. Others may have mild to severe problems, such as:

You will be asked about your symptoms and past health. A pelvic exam will be done.

Images will be taken of the pelvis. This can be done with an ultrasound taken from the outside of the belly. It may also be done with a probe placed in vagina.

Laparoscopy is needed to confirm the diagnosis. A small cut is made in the belly. A scope is passed through the cut. It lets the doctor look for problem areas in the belly area. A sample of tissue may be taken as a biopsy. The sample will be carefully looked at and tested.

Treatment depends on how severe the problems are. The goals are to ease pain and slow tissue growth. Options may be:

Medicine may be given to ease pain and swelling. It may be over-the-counter pain medicine, such as nonsteroidal anti-inflammatory drugs (NSAIDs).

An intrauterine device (IUD) may be used in those who are not helped by birth control pills.

Some growths can get in the way of future pregnancy. Surgery may be done to remove those growths.

Surgery may also be done for severe symptoms that do not respond well to other treatment. The goal will be too remove as much problem tissue as possible. The tissue can grow back later. Hormone therapy may be used after surgery to lower the chance of growths coming back.

There are no steps to prevent endometriosis.

The American College of Obstetricians and Gynecologists
http://www.acog.org