Myelodysplastic syndromes (MDS) are a group of diseases that involve dysfunction of the bone marrow. Bone marrow is the tissue found within the bones. Its task is to create mature blood cells from stem cells. In all forms of MDS, this normal cell-creation process is disrupted by the overproduction of clones of a single stem cell. This leads to a decrease in production of normal red blood cells, white blood cells, and platelets.

The World Health Organization has classified MDS into 8 categories. Some forms are more serious than others, but all of them are serious enough to require a doctor’s care. Thirty percent of people with MDS develop acute myeloid leukemia (AML). Leukemia is a cancer of the white blood cells and their parent cells. As more is learned about MDS, experts began to see it as a form of cancer. 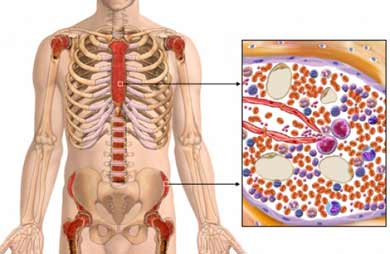 The cause of myelodysplastic syndrome (MDS) is unknown, but research shows that certain risk factors are associated with the disease.

MDS is more common in men and in those aged 60 years and older. Other factors that may increase your chances of MDS:

Your doctor will ask about your symptoms and medical history. A physical exam will be done. The symptoms for MDS can indicate many other conditions. Doctors have to rule out other conditions before diagnosing MDS.

Tests may include the following:

Treatment for MDS depends on your age, other medical conditions, and how serious the disease is. Treatment also depends on how far along the disease has progressed to AML. Often, treatment includes relieving the symptoms of MDS. Talk with your doctor about the best treatment plan for you. You may be referred to a hematologist and an oncologist.

If you have a low red blood cell, white blood cell, or platelet count, you may receive a blood transfusion. A blood transfusion is a treatment that involves receiving blood products (red cells, white cells, platelets, clotting factors, plasma, or whole blood) through a vein. The blood components may come from an unrelated donor, from a related donor, or may have been banked in advance by the recipient.

If you have a low white blood cell count, you may receive antibiotics to fight infection.

Chemotherapy is the use of drugs to kill cancer cells. Chemotherapy may be given in many forms including: pill, injection, or through an IV. The drugs enter the bloodstream and travel through the body killing mostly cancer cells, but also some healthy cells.

Hypomethylating agents are drugs that slow down the growth of cells and include:

Immunomodulating drugs change the immune system and include:

Immunosuppression agents suppress the immune system and include:

The only cure for MDS is a stem cell transplant (SCT). An SCT starts with high-dose chemotherapy to kill the bone marrow, and is then followed by an injection of healthy stem cells. The stem cells used can come from the blood or bone marrow.

Many doctors will only perform an SCT on a people aged 50 years and younger.

To help reduce your chances of MDS: