Asbestos is the name of a group of minerals that are made up of bundles of tiny fibers composed of hydrated magnesium silicates. It is mined from the ground. Asbestos has been widely used in building and manufacturing industries because it is not affected by heat or chemicals.

Asbestosis is a lung condition caused by breathing in asbestos fibers. Usually, when particles in the air are breathed in, they are filtered out by the nose or the upper airways of the lungs. But asbestos particles are very thin and light, and sometimes are not filtered out before they reach the lungs. After years of exposure, asbestos can damage lung tissue and is responsible for causing several serious diseases, including cancer. Mesothelioma is a specific type of cancer that is caused by inhaling asbestos particles.

Asbestosis is caused when the fibers are inhaled deep into the lungs. Here, they are trapped in tiny airways where they cause scarring, called fibrosis, to the lung tissue. Repeated or continuous exposure over a long time can cause scarring over large areas of the lungs. When this happens, lungs lose their elasticity. When lungs can’t expand and contract normally, a person will experience shortness of breath. Scarring also decreases the ability of the lungs to do their work of exchanging oxygen and carbon dioxide.

Thickening and Fibrosis of Lung Tissue 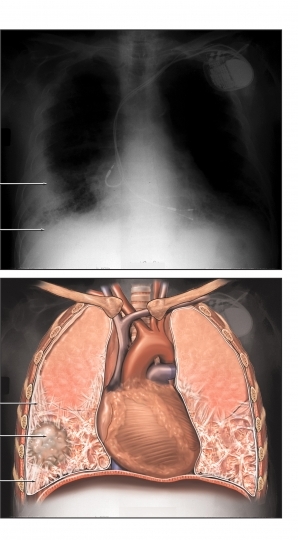 Asbestosis primarily affects people who are regularly exposed to asbestos. The more a person is exposed, the greater the risk of developing an asbestos-related disease. However, most people who have had prolonged exposure to asbestos do not develop asbestosis. Those at highest risk are:

Your doctor will ask about your symptoms and medical history. You will be asked about your history of exposure to asbestos. A physical exam will be done.

Images may be taken of your bodily structures. This may be done with:

Your bodily fluids may be tested. This can be done with:

A pulmonary function test may also be done to measure how well the lungs take in and exhale air.

There is no treatment to cure asbestosis. The disease slowly worsens. The first and most important changes a person can make are the following:

After the condition is diagnosed, treatment involves staying healthy and treating the symptoms. These measures include:

Since the 1970s, asbestos use and handling has been increasingly controlled by the government. Asbestosis can be prevented by controlling the asbestos dust and fibers in the workplace. In addition, people who handle asbestos at work must shower and change their clothes before leaving work. As a result of these measures, fewer people develop the disease.

It is also important to note that smoking increases the attack and/or progression rate of asbestosis.