Hyponatremia is the low level of sodium in the blood. Sodium helps to control fluid levels in the body. It also affects blood pressure, your muscles, and nerves. Low sodium can lead to mild to severe health problems.

The amount of sodium in your blood is most often affected by:

Normal Anatomy of the Kidney 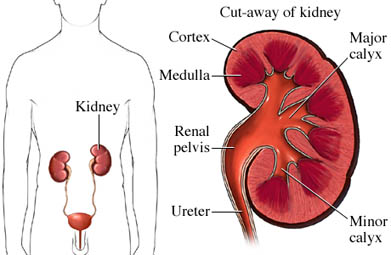 Hyponatremia is more common in older adults. Other factors that may increase your chance of hyponatremia include:

Mild changes will not cause symptoms.

Moderate to severe hyponatremia may cause:

Severe and rapid onset hyponatremia may cause:

You will be asked about your symptoms and past health. An exam will be done.

Treatment may depend on:

Care will be given in a hospital. The sodium level may need to be brought up slowly. Treatment options may include:

Your care team will help to find the cause. A plan will be made to avoid future problems. This may include better fluid options or changing medicine.

During activity, drink only as much water as you need to meet your thirst. Long or intense activity may need drinks with electrolytes.

National Institute of Diabetes and Digestive and Kidney Diseases
http://www.niddk.nih.gov