The eardrum is a very thin membrane made of tissue that separates the middle ear from the ear canal. The eardrum aids in hearing and in preventing bacteria and other foreign matter from entering the middle ear. 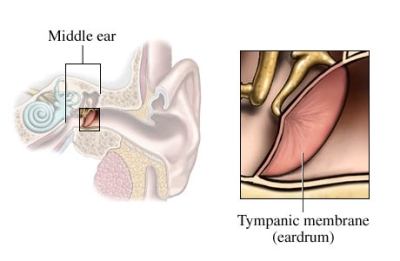 Eardrums may rupture from a variety of causes, including:

Factors that may increase your chance of a ruptured eardrum include:

You may not have any symptoms. For those that have symptoms, a ruptured eardrum may cause:

People who have traumatic ruptures to the eardrum may be at an increased risk of an ear infection. Infection may occur because the opening in the membrane allows bacteria to enter the middle ear and cause infection.

You will be asked about your symptoms and medical history. A physical exam will be done. During the exam, the doctor will examine the ear with an otoscope and look to see if the eardrum has been perforated. The perforation is sometimes difficult to see because of the thick drainage in the ear.

Doctors may also perform an audiology test to determine if any hearing loss has occurred.

While many ruptured eardrums will heal on their own, many may also require treatment to heal properly. Options may include:

If the eardrum does not heal itself, surgery may be required to repair the perforation, usually with a patch.

To help reduce your chance of a ruptured eardrum: