COPD is a long-term lung disease. It means there is an airflow problem in the lungs, which makes breathing very difficult. The condition is most often caused by damage to the lungs from smoking cigarettes. The two common forms of COPD are emphysema and chronic bronchitis. These diseases often occur together, but you may have symptoms more characteristic of one than the other. Typically, those with COPD have chronic shortness of breath and a chronic cough. They frequently cough up phlegm. 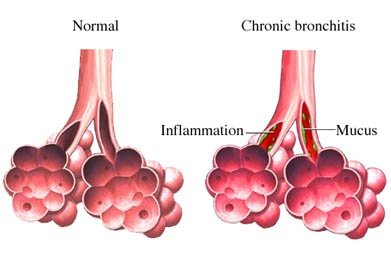 Chronic bronchitis is characterized by inflamed airway tissue and excessive mucus production. This leads to a persistent, productive cough for several months each year. The inflammation causes the large and small airways of the lungs to become narrowed. The lining of the passageways may become scarred. This makes it hard to move air in and out of the lungs. It results in shortness of breath. 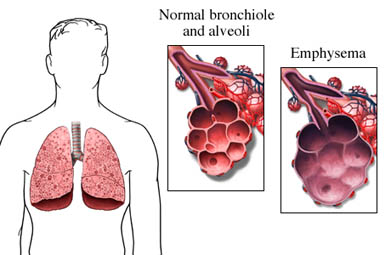 With emphysema, the walls between the tiny air sacs in the lungs lose their ability to stretch. They eventually become weakened and break. As the lung tissue becomes less elastic, air is trapped inside the air sacs. This impairs the exchange of oxygen and carbon dioxide.

Almost all COPD is caused by cigarette smoking. COPD is the third leading cause of death in the US. The American Lung Association estimates that more than 12 million people have COPD. This number could be much higher since some people may not know they have it. Deaths from COPD are greater among women than men. Sometimes people can miss the early warning signs of COPD, like shortness of breath. Missing these early warning signs often means that the disease is not found until much later and when it has worsened. When COPD is found early, there are treatments available to help manage the disease.