Gallbladder cancer is when cancer cells grow in the gallbladder. This is a somewhat rare form of cancer. The gallbladder is a small organ that sits beneath the liver. It stores a digestive fluid called bile. 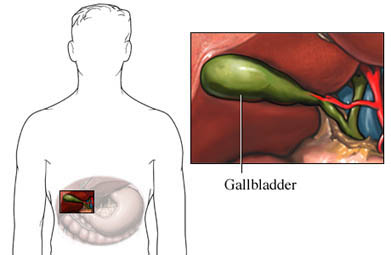 Cancer happens when cells divide without control or order. These cells grow together to form a tumor. They can invade and damage nearby tissues. They can also spread to other parts of the body. It is not clear what causes changes in the cells. It is likely a combination of genes and environment.

Gallbladder cancer is more common in older adults and women. It is also more common in people from South America, parts of Asia, and Eastern Europe. Other things that may raise the risk are:

Gallbladder cancer often has no symptoms in the early stages. When symptoms appear, they may be:

The doctor will ask about your symptoms and health history. A physical exam will be done. Gallbladder cancer is often hard to diagnose because there are no early symptoms. It is often found during abdominal surgery for other reasons.

Imaging tests will check the gallbladder and other structures. They may include:

The exam and test results are used to diagnose the cancer. They are also used for staging. Staging outlines how far and fast cancer has spread.

Treatment depends on the stage of the cancer. The goal is to remove all the cancer, if possible. For advanced cancers, treatment is done only to help ease symptoms. Options may be:

There are no current guidelines to prevent gallbladder cancer.