Moles are spots on the skin where pigmented cells have clustered together. They typically appear as light to dark brown spots on the skin. They can be flat or raised. Most people have benign moles, which are harmless.

Dysplastic nevi are atypical moles. They can eventually turn into a type of skin cancer called melanoma. 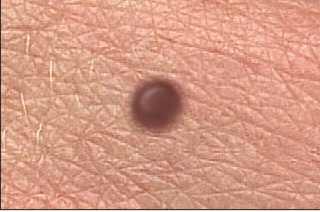 Moles develop from cells in the skin called melanocytes. Normally, these cells are evenly spread out in your skin. When you have a mole, these cells have formed a cluster.

Your chances of moles are higher if you have:

Most people have some benign moles that appear at birth through adolescence. Most adults have 10-40 moles.

Benign moles can appear anywhere on the body. They look:

Signs that a mole may be atypical include: 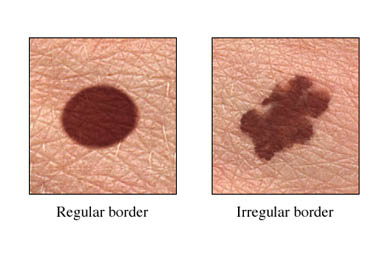 Call your doctor if you:

The doctor will ask about your symptoms and health history. You may have a:

Benign moles do not need to be treated. Surgery removes unsightly or irritated moles

Care for atypical moles includes watching it for changes or removing it. Atypical moles that are cancerous or suspected of being so can be removed. The mole tissue is examined under a microscope. You may need more surgery to remove the rest of the mole and any healthy tissue around it.

To lower your chances of moles becoming atypical or cancerous:

Have moles removed if advised by your doctor.