Sickle cell disease (SCD) is a blood disorder. The shape of some red blood cells (RBCs) change to a sickle (crescent moon) shape. The sickle RBCs can block blood flow in blood vessels. This will slow or stop the flow of blood and oxygen to tissues and organs.

The body will also destroy these RBCs because they are abnormal. This means you have fewer overall RBCs. Low levels of RBCs is a condition called anemia. This makes it harder for the body to get the oxygen it needs. 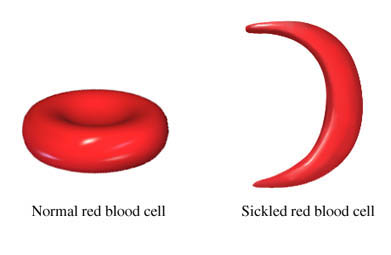 A defect in the genes causes SDC. This gene causes a problem with a part of the RBC called hemoglobin.

Parents pass the defect to their children. SCD will only develop if you get the defective gene from both of your parents.

If you only get one defective gene, you will not have SCD. But, you can pass this gene on to your children.

Sickle cell disease is most common in people who are Black or have with African ancestry.

Symptoms may be noticed as early as 6 months old. They are different in everyone depending on where problems are in the body. The most common include:

SDC crisis may cause:

SCD may cause other serious problems such as a stroke, or painful erections lasting 4 hours or more. These problems need immediate care.

All newborns have a screening test at birth. Blood tests will show the sickle shaped RBCs and other problems that indicate SCD. You may also have:

The goal of care is to lower the chances of health problems. It will include both medical care and lifestyle habits:

Young children may be given penicillin daily. It can help to lower the risk of certain infections. It’s given until the age 5 years. Penicillin is also used for people who had their spleen removed.

People with SCD have a higher risk of infections. Infections can also trigger other health problems. The doctor may advise:

Hydroxyurea is a pill that can help lower the risk of or prevent health problems. It increases the production of healthy hemoglobin.

Hydroxyurea lowers the chances of sickle cell crisis. It’s not right for everyone. It’s also unsafe for pregnant women.

HSCT is currently the only cure. It's not right for everyone. A donor with matching blood proteins will be needed. This is most often found in a brother or sister.

There are also a number of medical risks involved. For one, the immune system will need to be suppressed for the rest of your life. This can increase the risk for other illnesses. HSCT may be considered in children who have had severe complications.

Regular medical care is important. Keep in touch with your healthcare team. Early care of health problems may keep them from getting worse.

There is no way to prevent sickle cell disease. If you plan on having a family, talk to your doctor about genetic testing if you're at high risk. If you're pregnant, a prenatal test called amniocentesis can detect SCD before birth.