Sudden infant death syndrome (SIDS) refers to the unexpected, unexplained death of a child less than 1 year old. SIDS is rare during the first month of life. It peaks at 2-4 months of age, then gradually decreases.

Experts do not know the exact cause of SIDS. Many theories exist. Potential causes include: 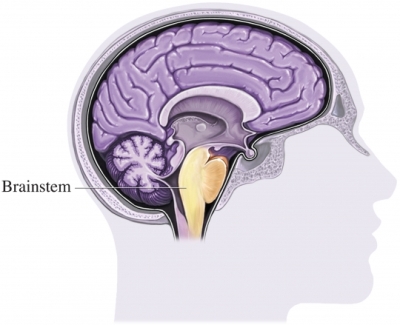 Area of the brain involved in regulation of breathing.

SIDS is more common in infants less than 6 months old. Other factors that increase your infant's chance of SIDS include:

A baby that dies of SIDS typically appears healthy. The baby may have had a cold or gastrointestinal infection in the 2 weeks prior to death. There usually are no warning signs that a baby is about to have SIDS.

All possible illnesses and causes of death must be ruled out before a diagnosis of SIDS is made. A complete investigation will take place including:

Emergency medical personnel should be called as soon as the infant is discovered not breathing. Infant CPR should be started right away. Seek medical care right away even if the baby starts breathing again. The cause of the incident should be fully evaluated. Families may need grief counseling after the death. Some parents find support groups helpful.

There is no way to predict which infants will die of SIDS. Several actions may help you lower your child's chance of SIDS: