How to Say It: Small for Je-Stay-Shun-Al Age

A baby who is small for gestational age (SGA) has a lower weight than normal for the number of weeks of pregnancy. Sometimes this raises the risk of early birth, low birth weight, miscarriage and other problems. 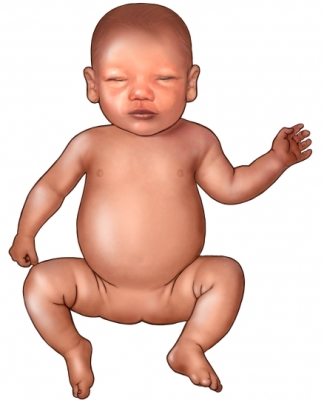 SGA may be caused by growth problems before birth. This can be due to:

Sometimes a baby is small because the parents are small. These babies have normal growth. They are just small compared to others their age.

SGA is more common in mothers who have had a prior SGA baby.

During pregnancy, problems in the mother can raise the risk. They include:

Symptoms of SGA are a weight that is in the lowest 10% of babies with the same gestational age.

A baby with SGA is often diagnosed before birth. A physical exam will be done on the mother. Measurements will be taken of the mother’s belly, weight, and uterus (womb). They are based on the number of weeks of pregnancy. If the measurements are low, the baby may be smaller than average. SGA may also be diagnosed at birth based on the baby’s weight and height.

Images may be taken during pregnancy with an ultrasound.

The goal is to watch for and treat problems in the mother and baby.

Babies that have SGA from lack of nutrition or oxygen may need treatment. Options are:

Babies who are born with SGA may be weak. They may not be able to feed enough or stay warm. Treatment may include:

Monitoring and treatment may also be needed during childhood.

SGA cannot be prevented when due to genes, syndromes, or problems with the uterus.

Otherwise, pregnant women may reduce the baby's risk of SGA by: