A collapse over large parts of the lungs can lead to serious problems. In infants, atelectasis may be present at birth or caused by another health problem. 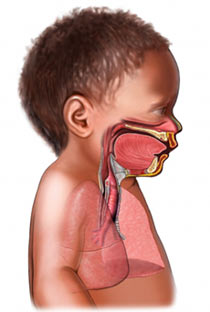 Atelectasis is not a disease. It is the result of a disease or problem in the body. It can be caused by:

Things that raise the chance of this problem at birth are:

Children under three years old are more likely to get atelectasis than older children or adults. Things that may the risk are:

Atelectasis may not have symptoms that are easy to spot.

Larger areas of atelectasis may lead to:

You will be asked about your child’s symptoms and health history. A physical exam will be done. It will focus on your child's breathing.

Images may be taken of your child's chest. This can be done with:

A bronchoscopy may be done to check for an obstruction. This is an exam of the lungs with a small tube.

Treatment will be based on the cause. Oxygen or breathing support may be needed until the problem resolves. Treatment options are:

Steps will be taken to remove any blockage that is causing the problem. This can be done using a tube that is passed down the throat and into the lungs. Small tools can be passed through the tube to remove the object or mucus plug.

This type of therapy may include:

Medicines may be used to:

Not all atelectasis can be prevented. These steps may lower the risk: