Normal Anatomy and the Development of Uterine Cancer

The uterus is part of the female reproductive system. It is a hollow, muscular organ in the pelvis. It sits near the bladder and in front of the colon. The ovaries are two, small oval-shaped organs. They sit on each side of the uterus. The ovaries produce eggs, and hormones that changes how the uterus works.

The uterus is made up of 2 parts:

The wall of the uterus is made up of 3 layers:

Endometrial cancer occurs when the cells of the endometrium start to grow too rapidly. The lining of the uterus may thicken in certain places. These areas of thickness may form a mass of tissue called a tumor. Cancer cells also can spread (metastasize) to other areas of the body. Its not always clear why these changes occur. Hormones may play a role in encouraging cancer growth. Endometrial cancer starts in the endometrial layer. Uterine sarcoma develops in the muscle layer of the uterus.

Uterine cancer can cause bleeding outside of menstruation. If cancer spreads beyond the uterus, it can affect nearby areas such as the cervix and vagina. It can lead to pain in the pelvis and pain with sex. Cancer can also spread to lymph nodes or blood vessels. The growth of uterine cancer in other areas of body is called metastatic cancer. The first areas that uterine cancer may spread to are the ovaries, bladder, and belly organs such as the colon. It can cause problems passing urine or stool. Other organs may include lymph nodes in other parts of the body, the lungs, liver, brain, and bones. 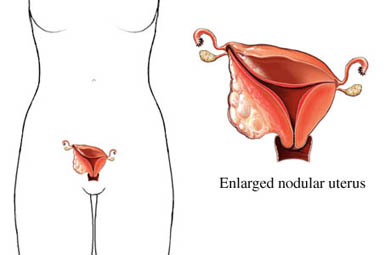 Uterine cancer is the most common type of cancer that affects the female reproductive organs. The most common type of endometrial cancer (type 1) grows slowly. It most often is found only inside the uterus. Type 2 is less common. It grows more rapidly and tends to spread to other parts of the body. There are different types of uterine cancer based on where they start and appearance under a microscope. Most uterine cancers are endometrial carcinomas. Cancer starts and grows in the endometrium that lines the inside of the uterus. There are 2 types of endometrial carcinomas:

Some endometrial cancers may be a combination of type 1 and type 2.

Uterine sarcomas tend to be aggressive and more likely to invade other tissue.