Atherosclerosis: At the ‘Heart’ of the Matter

The main function of the cardiovascular system is to transport blood throughout the body. Cardiovascular disease (CVD) occurs when blood flow becomes obstructed. Atherosclerosis, a build-up of deposits on the inside of arteries, is a primary cause. 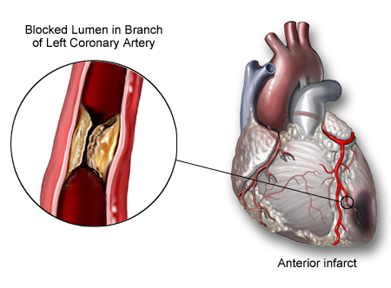 Atherosclerosis is a gradual disease process. Normal, healthy arteries start out smooth and stretchy. During early adulthood, fatty particles from the blood make their way into the inner layer of the artery. They build up and form fatty streaks. Injuries to the internal lining from smoking, high blood pressure, or diabetes, make it more likely that fatty particles will build up.

As time goes on, fat from low-density lipoproteins (LDLs) continues to build up. The lipids react with oxygen and are taken up by smooth muscle cells of the artery. The cells develop a foamy appearance. The foam cells attract platelets from the blood stream as well as calcium deposits and cell debris. The wall of the artery becomes inflamed as white blood cells try to heal the injured area. In the meantime, a fiber-like cap forms over the fatty mixture and creates a hardened lesion called an atherosclerotic plaque. As the plaque continues to grow, it stiffins and narrows the affected artery and slows the flow of blood through it. 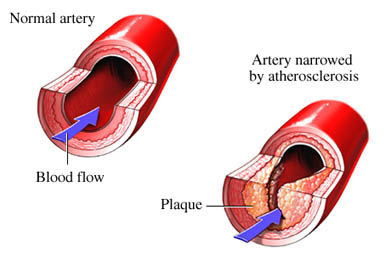 At times, the fibrous caps covering atherosclerotic plaques may rupture. When this occurs, blood cells called platelets are exposed to the contents of the plaque. This causes them to collect and form a clot at the site of the rupture—a process called thrombosis. Sometimes, these clots can grow large, leading to the total obstruction of flow in the artery. Pieces of the clot, called emboli, may also break off and travel downstream and block other arteries. 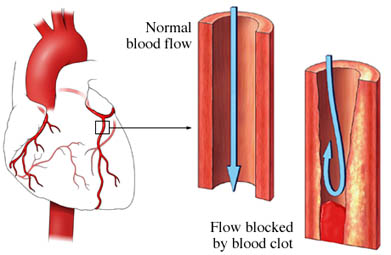 Atherosclerosis can eventually lead to the following conditions:

Other cardiovascular conditions unrelated to atherosclerosis include: