Anatomy and Physiology of a Healthy Cardiovascular System

The cardiovascular system is made up of the heart and blood vessels. Together, these organs primarily work to transport oxygen, via blood, to your body, and to rid the body of carbon dioxide. Oxygen is vital to the function of the body’s cells.

The blood also circulates other nutrients and waste products throughout the body.

Some facts about the heart:

Anatomy of the Heart

The heart is enclosed by the pericardium, which holds it in place. The heart is composed of 3 layers: the epicardium, or outer layer, the myocardium, or middle layer, and the endocardium, or inner layer. The myocardium is the actual cardiac muscle tissue, and it makes up the greatest part of the heart. With every heartbeat, the myocardium contracts involuntary, which means that it functions as a reflex action in response to electrical signals it receives from the heart’s conduction system.

Anatomy of the Heart 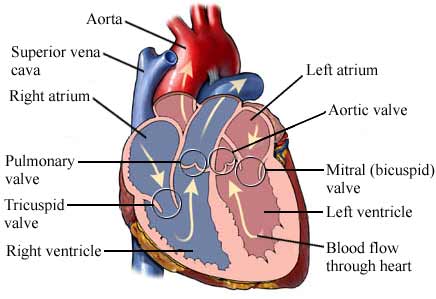 The heart is connected to the rest of the cardiovascular system through several large arteries and veins. The right atrium receives blood through the superior and inferior venae cavae, the 2 largest veins in the body, while the left ventricle receives blood via the pulmonary veins. The right ventricle pumps blood out through the pulmonary artery on its way to the lungs while the left ventricle ejects its blood into the aorta, the largest artery in the body, from where it is circulated throughout the rest of the body.

Atrioventricular (AV) valves are located between the right atrium and right ventricle and between the left atrium and left ventricle. They allow blood to pass in only one direction: from the atria to the ventricles. Semilunar valves, located at the base of the pulmonary artery and aorta, allow blood to flow out to the lungs and the rest of the body, respectively, but prevent backflow into the ventricles. The familiar “lub-dub” sounds of the heart are produced when the respective valves close after allowing blood to pass through them.

Blood Flow Through the Heart 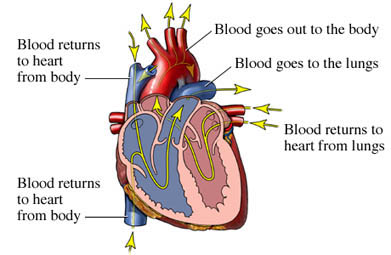 Blood from the body, referred to as the systemic circulation, flows to the heart through the venae cavae into the right atrium; the superior vena cava collects blood from the head, neck and upper extremities and the inferior vena cava collects blood from the trunk and lower extremities. This blood is depleted of oxygen and replete with carbon dioxide. When the right atrium fills, blood moves through the right atrioventricular valve into the right ventricle. This flow is enhanced by the contraction of the right atrium. Once the right ventricle has filled during diastole, systole begins with the contraction of its muscles, propelling blood though the semilunar pulmonic valve into the pulmonary arteries and onto the lungs. The lungs absorb the carbon dioxide from the blood and replenish it with oxygen. The newly oxygenated blood flows through the pulmonary veins into the left atrium. This circuit is referred to as pulmonary circulation.

Identical events are occurring on the left side as on the right. When the left atrium fills during diastole, it sends the oxygen-rich blood though the left atrioventricular valve (enhanced by its atrial contraction) into the left ventricle, which begins the process of systemic circulation. Once full, the left ventricle contracts during systole forcing blood through the semilunar aortic valve into the aorta. From here, the blood flows throughout the systemic circulation supplying the rest of the body (with the exception of the lungs) with oxygen and other nutrients.

The heart is a muscle controlled by an intricate electrical network referred to as its conduction system. The master of this system is the sinoatrial node (SA node) which is also known as a pacemaker. The pacemaker is located in the right atrium, near the opening of the superior vena cava. By spontaneously generating electrical activity, which initiates each cardiac cycle, the pacemaker sets the pace for the heart’s beats. 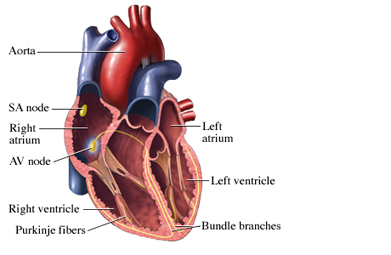 The electrical impulse spreads from the pacemaker through the myocardial cells of the atria, causing them to contract. Nerve impulses travel from cell to cell in a wavelike fashion through a network of gap junctions, which facilitate and accelerate the spread of the electrical impulses. The abundance of gap junctions in the heart ensures that the cells of the atria function as 1 single unit, rather than a collection of individual cells.

An electrocardiogram (ECG or EKG) records the transmission of electrical currents through the heart.

Your body contains more than 60,000 miles of blood vessels. These blood vessels, which make up the remainder of the cardiovascular system, form a network of tubes that transport blood from the heart, to all of the body’s living cells, and back to the heart. Blood vessels are grouped into arteries, capillaries, and veins.

From the aorta, blood flows into progressively smaller arteries, which carry blood away from the heart. When the heart contracts, it sends blood into the arteries under high pressure. The arteries are composed of thick layers of muscles that allow them to expand to receive this blood. They are also capable of elastic recoil, which they do when the left ventricle relaxes and blood pressure falls. By expanding and contracting in response to the flow of blood from the heart, the arteries keep blood flow smooth as it passes into the smaller arteries.

As arteries get smaller and more narrow, they become less elastic, but more muscular. These added layers of smooth muscle allow them to maintain their diameter even as blood pressure fluctuates as the heart expands and contracts. Also, as the arteries repeatedly divide, the pressure within each individual blood vessel drops dramatically.

The smaller arteries eventually branch into tiny arterioles, which connect the arterial system to the capillaries. By this point, the blood pressure has fallen to near zero.

Capillaries are the smallest, and most thinly walled, of the blood vessels. They create a network of connections between the arteries and veins. Capillaries provide a total surface area of 1,000 square miles over which oxygen and nutrients pass from the blood into body tissues, and waste products (such as carbon dioxide), pass from the tissues into the blood. It is through the capillaries that the main work of the cardiovascular system—oxygen and nutrient exchange—is accomplished.

The capillaries drain into venules, which then drain into larger veins. Veins contain thinner layers of muscle, which allow them to distend and accept more blood. As a result, veins contain the majority of blood volume in the body. However, they carry blood at a slower speed and at lower pressure.

Because blood pressure in the veins is so low, they cannot return blood to the heart without some help. Veins contain valves, much like those in the heart itself, which keep blood flowing in one direction, back towards the right atrium. In addition, the contraction of skeletal muscles creates a massaging action on the veins that pass among them. Skeletal muscle contraction is particularly important to returning blood from veins in the lower limbs. The act of breathing also helps the flow of venous blood back to the heart.

It may seem strange, but even though the chambers of the heart continuously pump all the blood in the body, like every other organ the heart itself needs its own separate blood supply. The flow of blood through the heart’s own blood vessels is known as coronary, or cardiac circulation.

Just beyond the aortic valve, the left and right coronary arteries branch from the aorta to supply oxygen-rich blood to the myocardium, or heart muscle. Oxygen-depleted blood is then returned through the cardiac veins and then through the coronary sinus, a large vein, which empties into the right atrium.

Most blood flow through the coronary arteries and veins occurs while the heart is relaxing between beats.

The purpose of the cardiovascular system is the transportation of blood throughout the body. Blood is composed of a liquid portion called plasma and cellular components, which consist of red blood cells, white blood cells, and platelets.

Plasma, which is composed primarily of water, contains:

Red blood cells contain the protein hemoglobin, which allow them to efficiently transport and release oxygen throughout the body. More than 99% of your blood cells are red blood cells. White blood cells, or leukocytes, are vital to the function of the body’s immune system. Platelets circulate in the blood and play a role in forming blood clots.