Radiation therapy uses high energy x-rays to destroy cancer cells. Special tools and dosing will help to kill as much of the cancer as possible while minimizing the effect on nearby healthy tissue. A radiation oncologist will customize the treatment dose for individual needs.

For lung cancer, radiation therapy may be used in combination with chemotherapy (called chemoradiation). The combination of chemotherapy and radiation is often more effective in shrinking lung tumors and extending life than either treatment alone. The timing of treatment will depend on the stage of the tumor.

Radiation therapy may also be given:

There are many different radiation machines used for external radiation therapy based on the size and location of the tumor, surrounding tissue, and type of cancer. The radiation oncologist will discuss options, doses, and frequency of radiation so that the highest amount of radiation can be delivered to the cancer with as little impact on healthy tissue as possible. External beam radiation is often given daily over the course of several weeks. 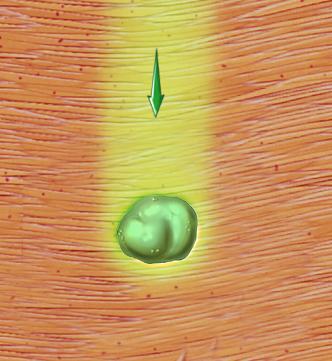 Delivery methods help to deliver the maximum amount of radiation possible to the tumor while minimizing exposure to healthy surrounding tissue. Methods to improve delivery include:

This is also called internal radiation therapy. Radioactive material in a specialized container is placed near the tumor. This allows a higher dose of radiation to be delivered directly to the tumor. It is generally used to treat tumors that are obstructing the airway. The material is placed during a bronchoscopy, a procedure that threads a lighted tube into the nose or mouth and down the trachea to the tumor site.

Drugs containing radioactive particles may be useful in treating some widespread carcinoid tumors.

Complications of radiation therapy to the chest and abdominal areas may include:

A variety of treatments are available to help manage side effects of radiation therapy, such as dry, irritated skin, nausea, vomiting, and fatigue due to anemia. Sometimes adjustments to treatment doses may also be possible. The earlier side effects are addressed, the more likely they will be controlled with a minimum of discomfort.