(Water on the Brain)

Hydrocephalus is too much cerebrospinal fluid (CSF) in the brain. This clear fluid surrounds both the spinal cord and the brain. Too much of this fluid puts pressure on the brain. 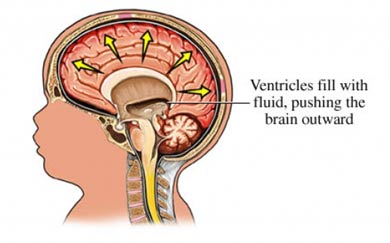 A person can be born with this problem or get it after an injury or illness.

Hydrocephalus can be caused by:

Things that may raise the chance of this problem are:

Symptoms may be mild at first and then get worse as pressure on the brain increases.

Symptoms in adults may be:

Symptoms in infants may be:

Images of the brain may be taken. This can be done with:

A lumbar puncture may be done in adults to test CSF.

There are no current guidelines to prevent hydrocephalus in adults. Getting regular prenatal care may help prevent it in infants.