Human reproduction is a complex and remarkable process. Male and female reproductive systems compliment one another, and each is essential for reproduction.

There are 2 types of sex cells involved in human reproduction: the male’s sperm and the female’s egg. An egg that has been fertilized by a sperm cell grows and divides in a woman’s uterus throughout pregnancy until childbirth. The resulting child’s genetic makeup comes from the sperm and egg cells produced by the father and mother. 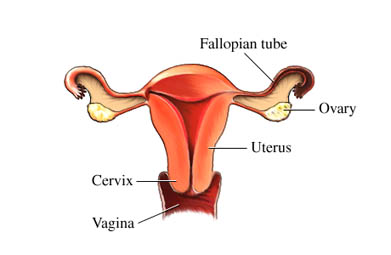 The female reproductive system includes the:

During a woman’s menstrual cycle, which usually lasts about 28 days, her body prepares for the possibility of a pregnancy.

In the first half of the menstrual cycle, estrogen levels rise to thicken the lining of the uterus. At the same time, an egg begins to mature in one of the ovaries.

Around the midpoint of the menstrual cycle (for example, day 14 of a 28-day cycle), a surge of luteinizing hormone (LH), which is produced by the pituitary gland in the brain, causes the mature egg to leave the ovary, a process called ovulation.

In the second half of the menstrual cycle, fingerlike projections located at the opening of the Fallopian tubes sweep the released egg into the tube toward the uterus. At the same time, rising levels of progesterone help prepare the lining of the uterus for pregnancy. If sperm cells are present at this time, the egg may become fertilized. If no sperm cells are present, the egg either dissolves or is absorbed into the body, no pregnancy occurs, hormone levels drop, and the thickened lining of the uterus is shed during the menstrual period.

Pregnancy lasts for an average of 280 days, or about 9 months, until the baby is ready for birth and moves from the uterus through the cervix and out of the vagina. 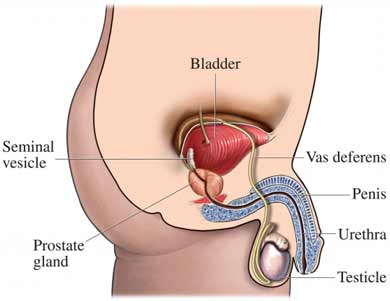 The male reproductive system includes the:

When a male is stimulated, sperm cells move out of the testicles, through the epididymis, and into the vas deferens. They are mixed with the whitish seminal fluid produced by the seminal and prostate glands to form semen. The penis then fills with blood and becomes erect, and muscles contract, forcing semen through the urethra and out of the male’s body, a process called ejaculation. Each ejaculation can contain up to 500 million sperm.

When ejaculation occurs during intercourse, semen is deposited into the female’s vagina. Sperm cells “swim” from the vagina through the cervix and uterus, toward the Fallopian tubes. If a mature egg is present in one of the Fallopian tubes, a sperm may penetrate and fertilize it.

The Society of Obstetricians and Gynaecologists of Canada
https://sogc.org