Group B streptococcal (GBS) infection is rare illness in newborns. It is caused by a bacteria that is often passed to the baby in the birth canal.

GBS is a specific bacteria. It is common to find this bacteria on the skin along with other bacteria. GBS may pass to newborns in the birth canal during delivery. They may also pick up the bacteria after birth when they come in contact with someone who has the bacteria on their skin. 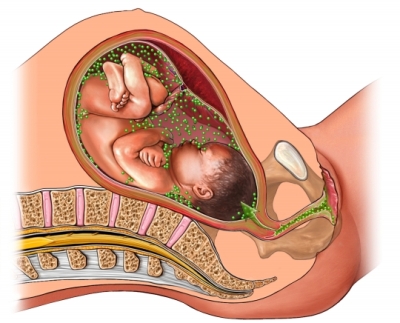 Things that may raise a baby's risk of GBS infection include:

The newborn with GBS infection may have:

A pregnant woman will rarely have symptoms.

Pregnant women are tested for the presence of GBS about 5 weeks before delivery date. It is part of normal prenatal care. A cotton swab will be swiped over the vagina and rectum. A lab will test the sample for GBS. If GBS is found, the mother is said to be colonized.

A baby born to a mother with GBS will not always be ill. Tests to confirm GBS infection in the baby may include:

A mother can be colonized with GBS and not be sick. Treatment may be done to decrease the risk of passing GBS to the baby. Antibiotics will be given through IV during labor. Treatment must be given at least four hours before birth.

A newborn with a GBS infection may be need extra days of medical care. Antibiotics will be given.

The risk of a GBS infection in newborns may be decreased by:

The Society of Obstetricians and Gynaecologists of Canada
http://sogc.org