Cystic fibrosis (CF) is an inherited disease that affects the lung, airways, and digestive systems. It causes the body to make thick and sticky mucus. This can cause problems with breathing and digestion. 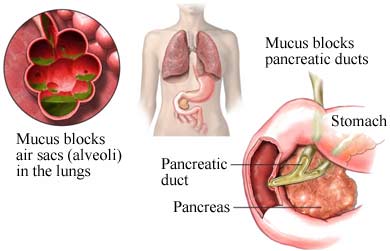 A child with CF has faulty genes from each parent. Parents who have the gene, but do not have CF, are called carriers.

This problem is more common in people with:

This problem is diagnosed based on symptoms, family history, or a positive screening test in newborns. It can be confirmed with genetic testing. Other lab tests that may be done are:

There is no cure. It can be managed by:

Dietary changes will need to be made to improve nutrition. This can be done with:

Thick mucus raises the risk of severe infections. Antibiotics will be used to help treat and prevent them. Yearly flu shots should also be given.

Other things that may help clear the airways include:

Some people with severe symptoms may need lung transplant surgery when other methods do not help. Surgery may be also be done to treat blockages in the intestine.

There are no current guidelines to prevent CF.

About cystic fibrosis: what you need to know. Cystic Fibrosis Foundation website. Available at: http://www.cff.org/AboutCF. Accessed May 1, 2020.