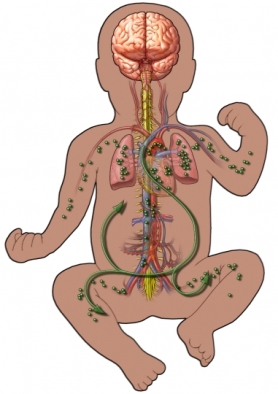 Neonatal sepsis is caused by bacteria.

This problem is more common in babies that are:

Other things that may raise the risk are:

You will be asked about your baby's symptoms and health history. A physical exam will be done.

These tests will be done to look for signs of infection:

Treatment depends on how severe the problem is. It may include:

Neonatal sepsis may be prevented by good prenatal care. This includes controlling any bacteria in the mother before it is spread during pregnancy or birth.