Menstrual disorders are changes in normal menstruation (periods). Changes may be short or long term.

A normal cycle is about 28 days from the first day of bleeding to the first day of the next period. It is also normal for it to be 21 to 35 days. The rise and drop of the hormones progesterone and estrogen cause a period to happen. A rise causes the lining of the uterus to become thin. A drop causes the lining to break down and pass out of the body. This is what causes bleeding. Bleeding often lasts from 3 to 5 days. It is also normal for it to last 7 days. This cycle will happen each month from about 12 years of age to an average age of 51 years of age. The cycle normally only ends with pregnancy or menopause. 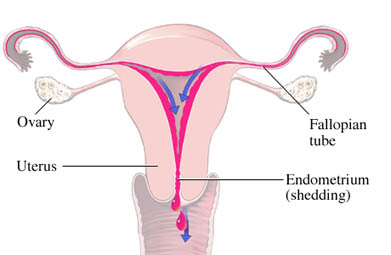 Most women lose about two ounces of blood or less. Menorrhagia is a loss of more blood than normal. This happens if there is a high volume of blood or a period that lasts more than seven days. It can be caused by hormone changes or physical problems. The loss of blood can lead to anemia and other health problems.

Girls may not start to have their period when expected. This is called primary amenorrhea. It found when a girl does not have a period by:

Periods may also stop after they have already started. Secondary amenorrhea is when it is absent for at least three cycles. It may be caused by:

Amenorrhea can lead to problems like a decrease in bone density. It can cause a higher risk of osteoporosis.

Other Types of Abnormal Bleeding

Some causes of abnormal bleeding are: