Bullous pemphigoid is an autoimmune disorder that causes blistering of the skin. 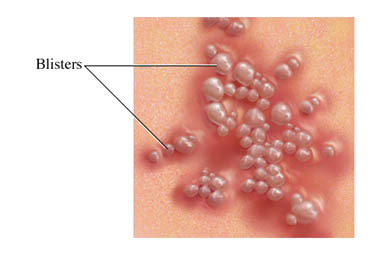 In a small number of cases bullous pemphigoid may occur after:

Severe itching of the skin is often the first sign. Eventually an eczema-like or hive-like rash and blistering will develop. Blisters are usually clear and are most commonly seen on the arms, legs, abdomen, and mouth, usually along creases in the skin. The blisters can break and form ulcers.

It may be a few years between the start of itching and the appearance of a rash.

You will be asked about your symptoms and medical history. A physical exam will be done. You may be referred to a skin specialist.

Tests may be done to help distinguish bullous pemphigoid from other conditions with similar symptoms. Tests may include:

Bullous pemphigoid responds well to treatment and usually resolves completely within 5 years. Talk with your doctor about the best treatment plan for you. Options include:

Certain medications may help lower the immune system and decrease damage to the skin. Medication options may include:

Antibiotics or antiseptic medications may also be used to prevent or treat infections in broken skin.

Blisters will be left intact when possible. However, blisters that interfere with daily tasks may be drained.

Proper skin care will decrease the risk of infection in damaged skin.

Since the cause is not clear, there is no known way to prevent bullous pemphigoid.