Atelectasis is a collapse of the air sacs in the lungs called alveoli. It may occur in a portion of the lung, or in the entire lung. Normally, oxygen enters the body through the lungs and is exchanged with carbon dioxide in the alveoli. The lungs expand and contract to create the exchange of these gases.

Atelectasis is not a disease, but a condition or sign that results from disease or abnormalities in the lungs. 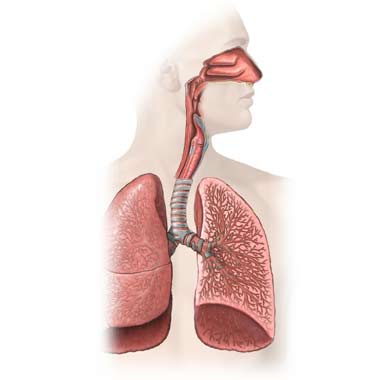 Atelectasis is caused by:

Factors that may increase your chances of atelectasis:

Symptoms that may occur if a large area has collapsed include:

You will be asked about your symptoms and medical history. A physical exam will be done. This may include listening to your lungs for changes in the normal sounds.

Your body structures may need to be viewed. This can be done with:

Other tests may be needed to confirm or rule out the cause of the atelectasis.

The therapist uses different techniques to help clear mucus from the lung. You will be positioned so that gravity helps secretions flow out of the body. When resting in bed, lie on the unaffected side to promote drainage from the lung area that has collapsed. Moving around will also help clear your lungs.

Respiratory therapy may include any or all of the following:

Your doctor may recommend:

Bronchoscopy may be used to remove a foreign body or mucus that is blocking the airway.

To help reduce your chances of atelectasis: