The common cold is an infection that can inflame the nose and throat.

Sore Throat Due to Inflammation 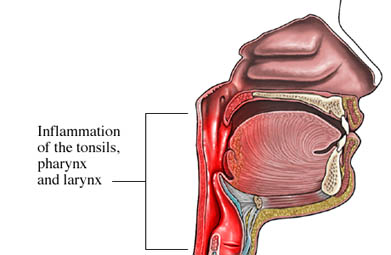 The common cold is caused by a virus. There are over 200 different viruses that can cause a cold.

The common cold is most common in infants and young children. However, people of all ages get colds. They are also more common during autumn. Other things that raise the risk are:

Symptoms of the common cold may be:

The diagnosis is most often based on symptoms. Tests are usually only given if another condition is suspected, such as pneumonia.

A cold often lasts 10 days or longer. There is no cure, but treatments can ease symptoms. Options may be:

The risk of getting a cold may be reduced by: