Psoriasis is a chronic, inflammatory skin disease. Knees, elbows, scalp, trunk, and nails are the most commonly affected areas. There are several types of psoriasis: 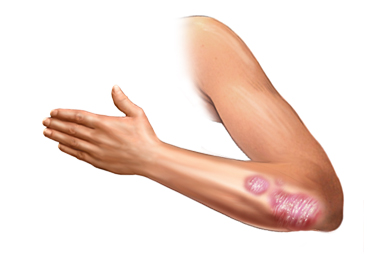 The cause of psoriasis is unclear. Signals from a defect in the immune system may result in an overgrowth of skin cells. Because the cells grow faster than they can be shed, they pile up on the skin's surface. The excess skin cells are thought to cause the silvery white scales that are characteristic of plaque-type psoriasis.

Factors that may increase the chances of psoriasis:

The red, thickened, and rough patches of psoriasis may occur anywhere, but are commonly found on the scalp, elbows, knees, palms, and soles. Other symptoms include:

The skin may also be sore, burning, or itchy depending on the type of psoriasis.

The rashes and lesions may come and go.

You will be asked about your symptoms and medical history. A physical exam will be done. It will include an exam of your skin and nails. There are no specific blood tests or diagnostic procedures for psoriasis. Sometimes a skin biopsy will be done to confirm the diagnosis.

Treatment is based on:

Many patients respond well to treatments applied directly to the skin. Topical treatments include:

If psoriasis covers more than 10% of the body, it is difficult to treat with topical medications alone. Daily, short, nonburning exposure to sunlight clears or improves psoriasis in many people. Sunlight is often included among initial treatments.

A more controlled form of artificial light treatment (UVB phototherapy) is often used in cases that are more widespread. Alternatively, psoriasis can be treated with ultraviolet A (UVA light) and psoralen. Psoralen is an oral or topical medication that makes the body more sensitive to light. This treatment is known as PUVA.

Phototherapy can be very effective in controlling psoriasis, but it requires frequent treatments. It may cause side effects such as nausea, headache, and fatigue, burning, and itching. Both UVB and PUVA may increase the person's risk for squamous cell and melanoma skin cancers.

For more severe types of psoriasis, doctors may prescribe a number of other powerful medications, which can be effective, but are associated with side effects that are more serious. These include:

Avoiding physical trauma to the skin, infections, and cold, dry temperatures may help reduce flare-ups in people with the condition.