Sleep apnea occurs when breathing stops for brief periods of time while a person is sleeping. It can last for 10-30 seconds, and may occur up to 20-30 times per hour. During one night of sleep, this can cause up to 400 episodes of interrupted breathing. 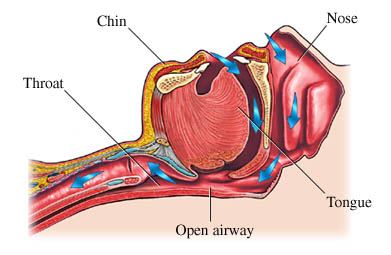 Every time you stop breathing, you interfere with the normal patterns of deep sleep. The quality of sleep that you get is greatly impaired. Your level of alertness and your ability to pay attention may be seriously affected. 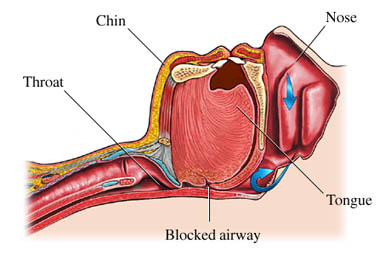 If you have sleep apnea, you are also more likely to have:

There are several kinds of sleep apnea. These include:

This is caused by a temporary airway obstruction. This blockage may be partial or complete. Obstructive sleep apnea can occur when the tissues of your throat relax too much and cave in on each other. If you are overweight, then your excess tissue might be putting too much pressure on your airway, causing it to collapse. You may have a deviated septum, nasal polyps, large tonsils, or an elongated soft palate and uvula that obstruct your airway while you are sleeping.

For children, enlarged tonsils and adenoids are the most common reason for obstructive sleep apnea.

This occurs when the lower brain stem fails to send signals to the muscles that control breathing. Conditions that cause problems with the lower brain stem include certain types of polio, encephalitis, stroke, brain tumors, and other diseases that affect the brain and central nervous system. For children, the most common reason for central sleep apnea is prematurity.