The sinuses are hollow areas in the skull that are arranged in pairs. Sinusitis occurs when the tissue lining the sinuses in the skull around the nose (the paranasal sinuses) becomes inflamed and infected. Sinusitis usually occurs with inflammation in the nasal passages (rhinitis). When they occur together, it is called rhinosinusitis. The infections are categorized by the length of time symptoms are present: 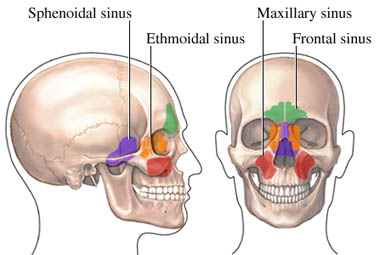 Several viral, bacterial, or other causes are associated with acute sinusitis.

All are bacteria that are often found in the nose and throat of healthy people, and which cause other common conditions, such as acute bronchitis and ear infections. A viral upper respiratory infection such as the common cold often occurs just before developing a bacterial infection.

Certain other bacteria and fungi, can be a cause of chronic sinusitis.

Sinusitis starts with swelling of the nasal and sinus passages. Tiny hairs called cilia usually move constantly to help shift mucus out of the sinuses. With sinusitis, these hairs stop working as well as they should. Both the swelling and lack of movement from cilia make it difficult for mucus to move out of the sinuses. This buildup of mucus and air create the pressure and pain associated with sinusitis. It also creates a place for bacteria and viruses to grow.

Sinusitis is an extremely common problem. In a given year, about 37 million Americans suffer from sinusitis.