Psoriasis is a chronic, noncontagious skin condition characterized by scaling and inflammation. The inflamed skin forms red, thickened areas with silvery scales. The condition is most commonly found on the scalp, face, elbows, forearms, knees, shins, ankles, and lower back. The inflammation may also affect the fingernails, toenails, soft tissues of the mouth, genitalia, and joints. The inflamed skin is usually asymptomatic, but may cause pain and discomfort by cracking. Psoriasis is rarely itchy. 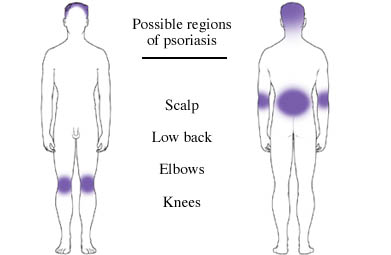 The exact cause of psoriasis has not been determined, but current theories suggest that it may be a disorder of the immune system. It appears that T-cells, a type of white blood cell that normally protects the body against infection and disease, trigger inflammation and excessive skin cell reproduction, which causes skin to shed too rapidly. Psoriasis is also believed to be associated with other cellular, biochemical, and metabolic defects.

Psoriasis flare-ups may be triggered by a variety of factors, including environmental exposures, infections, certain medications, and stress.

There are 5 primary types of psoriasis:

Plaque psoriasis: This is the most common form. It is characterized by raised lesions which have a reddened base covered by silvery-white scales. The scales shed frequently and are dry.

Guttate psoriasis: This type is most often triggered by bacterial infections (most commonly strep throat) and is most common in young adults and children. It is characterized by small, salmon pink drop-like lesions on the trunk, limbs, and scalp. It may clear up by itself after a few weeks or months.

Pustular psoriasis: Blisters of non-infectious pus appear on the skin and may affect large or small areas of the body, most commonly fingers, palms and soles. This type of psoriasis is usually triggered by medications, infections, emotional stress, or certain chemicals. It may be triggered by abrupt withdrawal of systemic steroids.

Inverse psoriasis (also called flexural or intertriginous psoriasis): This is usually found in skin fold areas, such as the armpits, under the breasts, or folds of skin near the genitals or buttocks. It may be exacerbated by friction or sweating in skin fold areas. The plaques are red, smooth, dry and large.

Erythrodermic psoriasis (also called exfoliative psoriasis): This is the least common form of psoriasis and is characterized by widespread reddening and scaling of the skin as well as severe itching and skin discomfort. This form occurs after a severe sunburn, some medication conditions, or use of certain medications. This type can be very serious and should be evaluated right away

Some people with psoriasis develop a condition called psoriatic arthritis. This occurs when the inflamed areas of the skin are accompanied by joint inflammation, most often in the hip, spine, knee, or elbow joints but also in the small joints of the hands and feet.

In some cases, psoriasis severely compromises quality of life. In addition to physical discomfort, people with psoriasis may develop emotional problems, such as depression or anxiety, and may experience social difficulties due to visible plaques. If you or a family member is suffering from psoriasis, seek out counseling, support groups, and services.

Psoriasis increases your risk of heart disease and type 2 diabetes.