Not all tumors are cancer, those that are cancer are called malignant. Cancer tumors invade and damage tissue around them. The cancer cells can also enter the lymph and blood streams, spreading to other parts of the body. Ovarian cancer is the development of malignant cells in one or both ovaries.

Normal Anatomy and the Development of Ovarian Cancer

The ovaries are part of the female reproductive system. They are two small, oval-shaped organs found inside the pelvic region on each side of the uterus. The main functions of the ovaries are to produce eggs and hormones (estrogen and progesterone) that control sexual development, reproduction, ovulation, and the menstrual cycle. As part of the menstrual cycle, ovarian cells shed in the peritoneum, a double-layered, fluid-filled membrane that surrounds and supports the abdominal cavity.

Each ovary is surrounded by a capsule and has 3 different types of cells:

Cell division and growth is a normal process in the body to replace old or damaged cells. Changes in hormones, which may or may not be affected by genetic abnormalities, cause changes in ovarian cells. These changes can alter the DNA of the cells which tells them when to grow and when to stop. Normally the cells only grow enough to replace old or damaged cells, but damaged DNA may cause the abnormal growth of cells, known as cancer.

Cancer in the Left Ovary 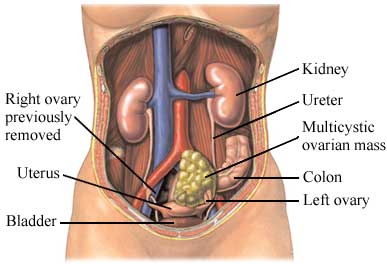 Ovarian cancer is characterized by where tumors start, where they grow, and their appearance under a microscope. Ovarian cancer types include: