Lyme disease symptoms will differ between people depending on the stage of the infection. In some, symptoms may not be present.

These symptoms typically occur within 3-32 days of a tick bite.

A hallmark symptom of Lyme disease is a red rash, known as erythema migrans (EM). The rash starts as a small red spot at the site of the tick bite and expands over a period of days or weeks, forming a circular- or oval-shaped rash. The rash often resembles a bull’s eye: a red ring surrounding a clear or bluish area with a red center. The size of the rash can range from dime-sized to the entire width of a person’s back. More than one ring may develop. Typically, the rash goes away within 4 weeks. 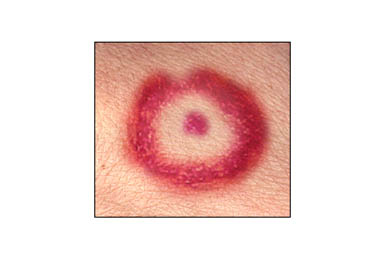 Although Lyme disease is often associated with this rash, many people do not have the rash right away or at all. Or they may have a red rash, without the bull's eye pattern. If you have other symptoms that you think might be due to Lyme disease, see your doctor; do not wait for a rash to appear.

Note: All symptoms of early manifestation usually occur with the first rash or within about 6 weeks of it. They may go away on their own within a few weeks or months.