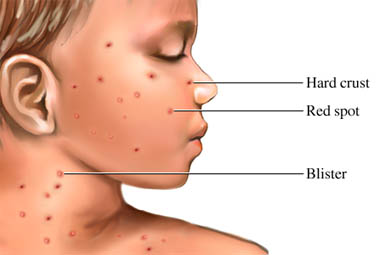 Chickenpox is a highly contagious viral infection. It produces a widespread itchy rash with blisters and crusting. The varicella zoster virus (VZV) causes chickenpox. The virus can spread from person to person via:

The virus is most contagious for 1-2 days before the rash erupts and during the first day or so after the rash has broken out. It remains contagious until all of the blisters have crusted.

Because of an extensive vaccination program, the incidence of chickenpox has declined greatly in the United States. The majority of cases occur in infants, children, and adolescents under age 12. The incidence among adults 20 years or older is very low. When contracted during childhood, chickenpox is usually not serious. Serious complications are more common when contracted by adolescents, adults, newborns, or people with a suppressed immune system. These complications can include: