Surgery is mainly used to treat breast cancer. The goal is to remove the cancer, and save as much of the breast and its function. Surgery is often one part of a treatment plan that includes chemotherapy or radiation therapy. Chemotherapy can also be used before surgery to shrink the tumor.

Breast-saving surgeries, often with radiation, are usually used for women in the early stages of cancer. This involves taking out the tumor and a small area of healthy tissue around it. Breast-sparing surgery types include: 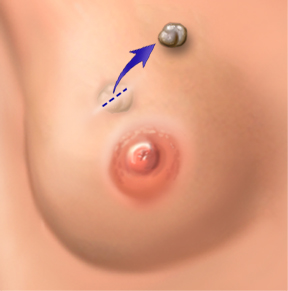 Not all women with early stages of breast cancer can have these types of surgery. There are certain conditions that keep them from being the best choices such as:

A mastectomy is the removal of the breast. This may or may not involve removing lymph nodes. The type will depend on how much the cancer has spread and if breast reconstruction will be done. 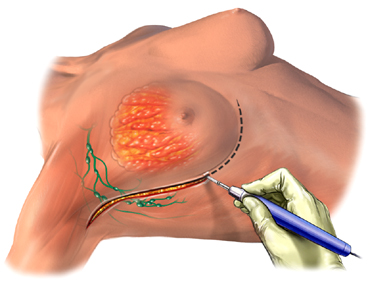 Lymph nodes can be taken out and checked for cancer as well. It can be done as part of this surgery or at a later date.

This can be used to prevent breast cancer. One or both breasts can be removed in women who are at a high risk for getting it. It can also be done for women with cancer in one breast and a high risk of cancer in the other.

The skin over the breast is spared during a simple mastectomy. This is done for women who will have reconstruction. You and your doctor will decide if this is the best type for you.

A form of this type can spare the nipple and areola. The nipple area will be checked for cancer to see if it can be left behind. Radiation may be given to the nipple during or after surgery. This lowers the risk of cancer coming back. This may not be the best type for all women.

A modified radical mastectomy is used to treat cancer that has spread beyond the breast. The breast, lining of the chest muscle, with or without the chest wall muscle, are removed. Lymph nodes from under the arm are also removed. Radiation may or may not be needed. It depends on the size of the tumor and if the lymph nodes have cancer.

A radical mastectomy involves removing the breast, chest wall muscles, lymph nodes under the arm, as well as some fat and skin. This type of surgery is rare.

Breast cancer surgery can involve more than just removal of the tumor and breast tissue. The lymph nodes are often removed and tested for cancer. This can help find if cancer has spread. The types are:

This can lead to lymphedema. Lymph vessels are found all over the body, but may become blocked when lymph nodes are removed. This can cause a backup of fluid into tissue. Your care team will teach you how to control lymphedema.

Reconstruction can be done with a mastectomy, at a later date, or not at all. Your doctor will help you find what works best for you.

If you decide to do this, talk with a plastic surgeon before surgery. Tell the doctor if you need radiation or there is cancer in the lymph nodes. You may have to wait between the radiation and reconstruction.