As the prostate enlarges, the urethra becomes narrower. The bladder will get stronger to compensate, but eventually normal outflow of urine is obstructed. Symptoms usually appear gradually over time.

The Prostate and Surrounding Structures 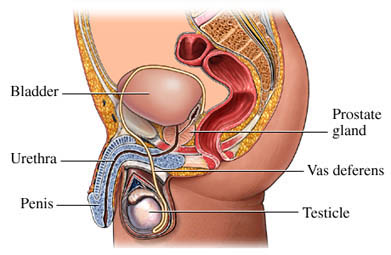 These symptoms are indications that your bladder is not emptying completely:

Other common symptoms include:

An obstructed urine flow often means that there is some urine stuck in the bladder (called residual urine). Having residual urine makes you vulnerable to urinary tract infections (UTIs), which can be either frequent or chronic. If you have a UTI, you may have additional symptoms, such as burning when you pass urine. UTIs by themselves also cause urgency and frequent urinating.

There is at least one common exception to the usual gradual development of symptoms. Sudden complete urine obstruction may occur in an elderly person due to dementia, inability to get out of bed, or drug side effects. The bladder may stretch to the size of a six-month pregnancy and fill the lower half of the abdomen. In such a case, emergency catheterization is required.