Fibromyalgia is a complex, chronic, and debilitating condition. It is characterized by widespread musculoskeletal pain, in conjunction with specific tender (trigger) points, generalized fatigue, and sleep disturbance. People with this syndrome may also experience gastrointestinal disorders, headaches, trouble concentrating, or psychological symptoms, such as anxiety or depression. 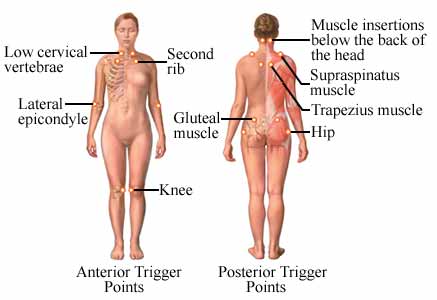 It is estimated that approximately 2% of adults in the US have fibromyalgia. The majority of the people with fibromyalgia are women, but the condition can occur in men and children as well. Most cases occur between the ages of 20 and 60 years, although fibromyalgia can develop at any age.

The exact cause of fibromyalgia is unknown, and there has been significant controversy in the medical community about its origin.

Currently, there are several theories regarding possible causes of fibromyalgia, including the following:

Sleep disorders —Sleep researchers have noted that people with fibromyalgia consistently show a disturbance during the stage IV (delta) cycle of sleep, which is considered the deepest and most restorative phase of sleep. Lack of restful sleep may be the cause of the overwhelming fatigue experienced by many with fibromyalgia.

Infections —Some researchers believe that there may be a viral or infectious agent that triggers the onset of fibromyalgia.

Preceding incidence of trauma —A high percentage of people with fibromyalgia have reported traumatic emotional or physical events, such as an automobile accident or divorce, shortly before the onset of fibromyalgia symptoms. Although it is not believed that the events themselves cause fibromyalgia, they may serve as triggers in people who are genetically or otherwise susceptible to developing this syndrome.

Biochemical abnormalities in the nervous system —Studies have shown that people with fibromyalgia often have highly elevated levels of Substance P, a pain neurotransmitter, in their spinal fluid. Levels of other neurotransmitters, such as serotonin and norepinephrine, or hormones, such as cortisol and growth hormone, may play a role.

Researchers continue to explore these and other explanations for the possible causes of fibromyalgia. Currently there is no cure, but symptoms can be diminished by a combination of pharmacologic and nonpharmacologic treatments.

Doctors have noted that many people with fibromyalgia are also likely to have other syndromes, such as:

There has been some speculation that fibromyalgia may not be a separate condition, but instead represents a constellation of symptoms that overlap with other illnesses, all of which may have the same cause or causes, which are still unknown.