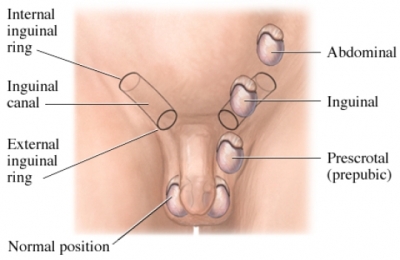 Undescended testicles are often caused by a disruption in the development of the testicles. The cause of this disruption is not clear. Genetics may play a role. There may also be some problems with the hormones that help testes develop. The testicles may also have been injured at some point during the pregnancy.

Factors that may increase your child's chance of undescended testicles include:

The main symptom is not being able to see or feel the testicle.

You will be asked about your child's symptoms and medical history. A physical exam will be done. A diagnosis is usually made during the physical exam. The doctor will note that one or both of the child’s testes cannot be felt within the scrotum.

Your child's bodily structures may need to be viewed. This can be done with ultrasound or laparoscopy.

Undescended testicles are treated because they may increase the risk of certain health conditions such as:

Talk with your doctor about the best treatment plan for your child. Treatment options include:

There are no current guidelines to prevent undescended testes.