Alpha 1 anti-trypsin (AAT) deficiency is a rare genetic problem. It causes low levels of the enzyme AAT or stops it from working well. This can lead to lung and liver disease in children and adults.

AAT is a protein that protects the lungs and other organs. It is made in the liver. A damaged gene stops the liver from making useful AAT.

The gene that causes AAT deficiency is passed from parents to children.

AAT deficiency can also harm the liver. The abnormal AAT proteins build up in the liver. It causes blockages which damage the liver tissue.

A child is at risk of AAT deficiency if either parent has the damaged gene. The risk of severe problems is higher if both parents carry the gene.

The first symptoms of the disease often appear in between the ages of 20 to 50 years. They may include:

If the liver is affected in adults, the following symptoms may be present:

Symptoms in children can occur in the first weeks of life or later in childhood.

You will be asked about your symptoms and past health. A physical exam will be done. You may be referred to a doctor who specializes in the lungs or liver.

Change in AAT or the liver will be found through:

Images may be taken of your lungs. This can be done with a chest x-ray or a CT scan. 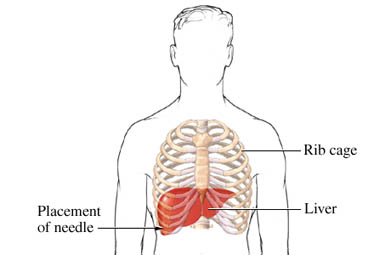 Treatment will help to manage changes to the lung or liver.

Options to ease breathing and decrease complications include:

Smoking can increase the damage to your lungs. Quit smoking and avoid being around others who smoke.

There is no specific treatment for liver disease due to AAT deficiency. Treatment focuses on symptoms and preventing complications. Treatment may include: