Multiple system atrophy (MSA) is a disorder of the nervous system.

MSA is sometimes called a Parkinson plus syndrome because many of the symptoms are similar. There are different types MSA based on symptoms. Once symptoms develop, the average life expectancy is 10 years or less.

The cause of MSA is unknown. Genetic factors may play a role in some families.

The symptoms are caused by degeneration of nerves throughout the brain and spinal cord. These nerves control automatic functions like balance and muscle coordination. The damage to the nerve may be caused by a buildup of a specific protein, but this is not a confirmed cause. 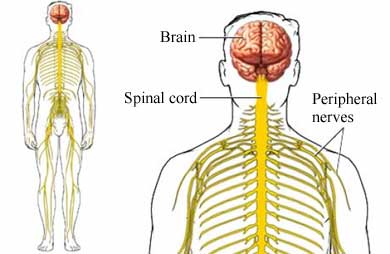 MSA tends to appear after 60 years of age.

Symptoms of MSA can vary greatly. Initial symptoms are similar to those of Parkinson's disease. These initial symptoms may also be determined by the type of MSA:

As the disease progresses, symptoms will cross over types and become more severe. Many will develop muscle coordination problems and need walking aids. Other problems that may exist across type include:

You will be asked about your symptoms and medical history. An exam of the nervous system will also be done. You will likely be referred to a specialist.

Images may be taken of your bodily structures. This can be done with an MRI scan.

Tests will also be done on your heart rate and blood pressure. These tests will help determine what is causing problems with your autonomic nervous system. Nerve impulses to your muscles may also be tested.

There is no cure for MSA. Treatment will focus on managing the symptoms and supportive care. Talk with your doctor about the best plan for you. Options include the following:

Various medications may be used to manage the symptoms of MSA. Medication may be given to:

Soft or pureed foods may be helpful with swallowing problems.

A feeding tube may be needed in later stages of MSA. It will deliver nutrition directly to the stomach.

There are no known guidelines to prevent MSA since the cause is not clear.